The cloud that the entire world is under right now is sadly very real. Isolation may make life daunting and the ceaseless media bombardment can be monumentally bleak. Whilst we all have to balance being aware, there is also a fundamental requirement to try to relax and disengage. Alongside looking after ourselves and our loved ones, for many, music might just be the tonic to get us through this…

In this heightened sense of weird reality, what actually cuts through the fog and helps to transport our battered and stretched minds to somewhere enrichening and removed from stress? Listening to Albert Ayler’s stellar Music Is The Healing Force Of The Universe a few days back made my hair stand on end – I’ve never wanted to believe a song more. Clearly OBLADADA practise what we preach, here’s the first grouping of music that have helped do just that. Perhaps they might be useful new diversions for you?

Endless Boogie’s formula has always been pretty simple, zone in one the ‘groove’ component of rock music and then copy and paste it over and over until your hypnotised and can’t see beyond that moment for ever. Whilst they’ve made several albums more recently, this collection smashes together their two earliest, more roughly cast chapters, and for us, it’s their most vital work.

Here, in shitty basement style recording, the music thrives on all the references it draws. Vol 1 starts with Outside My Mind and throws you straight into The Stooges jamming with NEU! Its 9 minute life cruelly over in a heartbeat. Dirty Angel dances on a pinhead with AC/DC before slowly exposing its cosmic droning underwiring. The 25 minutes of Stanton Karma feels like a blues dusted jam from Trad Gras Och Stenar as it continually expands.

Vol II similarly groups 3 recording with a similar template, Came Wide Game Finished, Style Of Jamboree and another vast 25 minutes of Morning Line Dirt. Whilst they are all perfectly entertaining, they feel 5 seconds more considered that the preceding blistering monsters.

But as a collection, it makes me dream of being in some packed filthy bar, just amazed and how great simple uncluttered rock music and loud amplification is sometimes all that’s required. Until that’s possible again, this is perfect music to drink beer and play air guitar (or drums) to, in your kitchen. 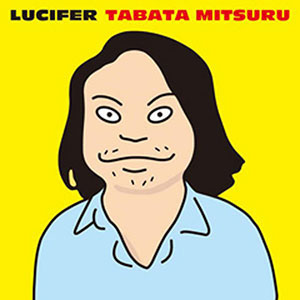 Whilst I only recently tuned into this album, its superb Simpson’s inspired sleeve helps frame this disc as a hugely satisfying release. Produced by Kawabata Makoto, the album is effectively Mitsuru with various guitars, hurdy gurdy, synths, sitar, maracas and his voice but he paints a vast and joyous world beyond the sum of its parts.

The opening title track, Lucifer grows out a guitar squall into a wonderful blossoming folky drone and ear worm. Moon Stone opens out as a pleasantly strummed ballad before going wide screen like the night sky. Feel Like A Polio and Ah Huh describe weird hanging space whispers before License To Kill dances around a heat haze. The plucked madness of Kill All French gets lost in infinite layers. To Be Drowned At Ocean has a shuffling groove that feels like Ziggy Stardust beaming back across the infinite.

But it’s the final 13 and half minutes of Ten Years Of Flying High that not unsurprisingly burns the brightest. Starting as a see sawing tweeting motif, it’s slowly overwhelmed by sonic debris. Eventually, rounded electronics boil the whole thing away to nothing before a heady sitar soars into view. You get sucked into the deep folds of the music for the remaining 8 minutes of alien bliss. Time stretches pleasantly as the whole thing just keeps rolling on decadently.

Lucifer plays out like a crazy unhinged adventure of an album and it’s one that’s well worth an uninterrupted 50 minutes zoning out on the sofa to.

Perhaps the most obviously choice might be music that is actually designed to be calm and relaxing. Gentle music that invites you into a meditative state. This beautiful short album by Olive Ardizoni zooms in on pleasant naturalistic sounds, with warm analogue electronics and gamelan chimes.

The final two tracks Soft Meadow and Xylem plot out a pleasing wobbly ambient grid.  Six Songs for Invisible Gardens delights in a synthetic reimagining of plants and fresh air. It’s a hugely welcome way to bring a seemingly nutrient rich atmosphere to your home.

Clearly time alone and in isolation gives us the focus to do what we please and has always been a fertile seam for raw creativity. It also means that we sometimes have to make do with what we have to hand. Made in a seemingly melancholic bubble, Shadowmen collects 12 beautifully drenched songs from the mind and bedroom studio of Hanoi based J. William Parker.

Equipped with little more that a guitar, his voice and a thick lo-fi fog, he sculpts huge arcs of potent acid folk. Whilst there are clusters of songs, the whole album feels like a single snaking piece dominated by huge atmospheric voids. Tracks like the beautiful Tigers In The Glass Room move from the tiniest of origins into a lilting folky joy. Wild distortion pulls at The Stranger dragging a protest song towards pure texture. Even the Hendrix cover of Hear My Train Coming doesn’t remotely upset the overall illusion.

Shadowmen’s brief 33-minute footprint makes it perfect to loop over and over again. Whilst it initially feels like it may be down beat and some of the titles sound ominously grim, it’s actually full of beautiful bright light.

Imagine Sixto Rodriquez getting fixated by Flying Saucer Attack. An oddly uplifting collection of torch songs tailor made for our world right now.

Get lost in the fog here

Whilst the work of John Cage might not necessarily be the place many would look to relax, this collection of many of his very last works, up against some of his earliest, is as surprising as it is effective. The huge smudged sweep of Seventy-Four For Orchestra (1992) is breath-taking. The 2 hours of 103 For Orchestra (1991) is a gradual swelling drone that occasionally crackles into life as it grows around an unwavering core.

The centre piece in all this, is the staggering beautiful In A Landscape which is usually played on piano. As a very early piece of 1948 vintage, it’s well known as a homage of sorts to Cage’s hero, Erik Satie. Here though, the already glorious forms are played on a harp which feels like the piece is finally somehow even more supremely realised.

As someone that’s regularly cited Cage as my hero, I never really expected much from the work he made towards the end of his life. However, these compositions are some of the most rewarding, accessible and uplifting works he ever made. How Cageian is that?

Get the Sound of Changes here

View all posts by obladada john

OBLADADA is a music blog, based in rural Scotland. We only write about the music we love (there is enough negativity in the world!) and are completely independent.

During business hours, we are also INDUSTRY COTTAGE – Design, Brand and Marketing specialists. Get intouch for more information HERE